Her Majesty mentioned to the ex Deputy PM Nick Clegg during a lunch at Windsor Castle that we should leave the EU, The Sun reports. 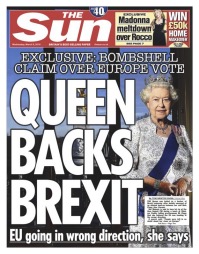 The 90-year-old monarch firmly told passionate pro-European Mr Clegg that she believed the EU was heading in the wrong direction.

Her stinging reprimand went on for “quite a while”, leaving other guests around the table stunned.

-Norway and Switzerland are not in the EU, yet they export far more per capita to the EU than the UK does; this suggests that EU membership is not a prerequisite for a healthy trading relationship.

-Furthermore, Britain’s best trading relationships are generally not within the EU, but outside, i.e. with countries such as the USA and Switzerland.

-The largest investor in the UK is not even an EU country, but the US.

Concerns over the Single Market being a whole load of poppycock are more relevant than ever, especially since the eurozone debt crisis of 2009.

First and foremost, even though we are meant to be part of one big unit, we have no fiscal union to address underperforming areas.

In Britain, for example, London may generate greater amounts of wealth than certain regions in the country. If somewhere like Nottingham was struggling, the money is redistributed to pay for welfare or prop up the local economy. Infrastructure, like new railway lines, could be installed to link cities and create greater connection for people working or looking to expand business.

In the EU, we don't have this. Just look at Greece and the sorry mess it is. Sure, we lend money and force them to gut their country from the inside out, but a loan is not a re-distribution of wealth. Countries that need to devalue their currency to spur exports can't. The bloc is not a "single" anything.

The EU isn't doing as well as it used to and it's really down skewed economic reporting that suggests the eurozone is doing great. As demonstrated before, Germany is propping up manufacturing growth figures.

Britain can now move on with growth worldwide and there are sure to be other EU member states following our path.